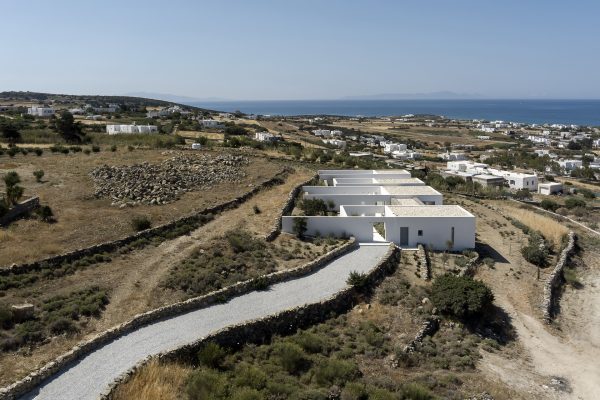 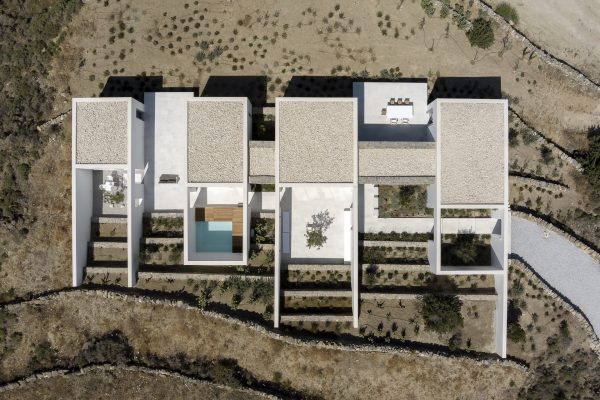 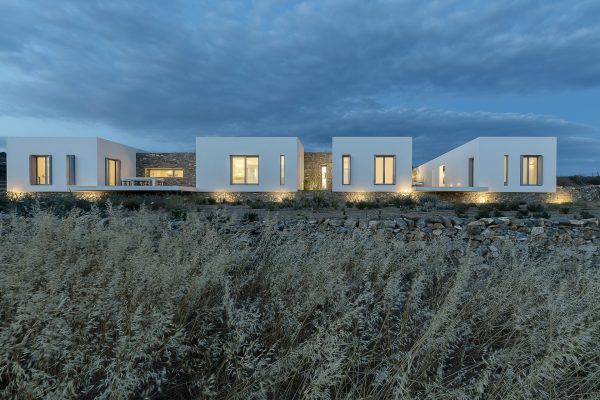 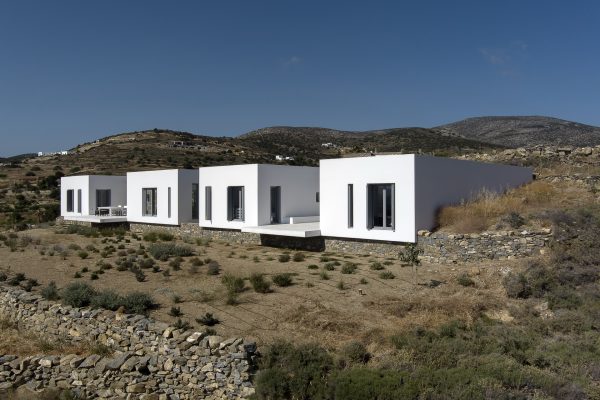 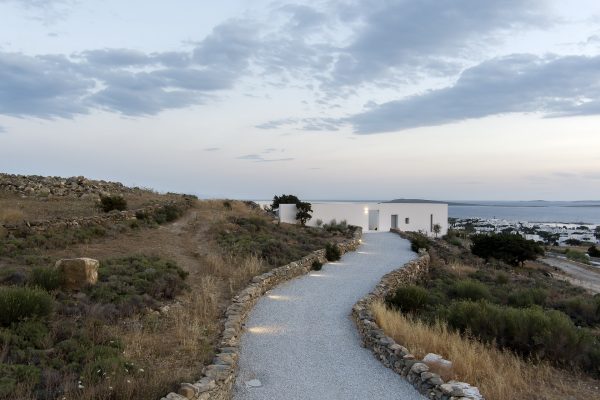 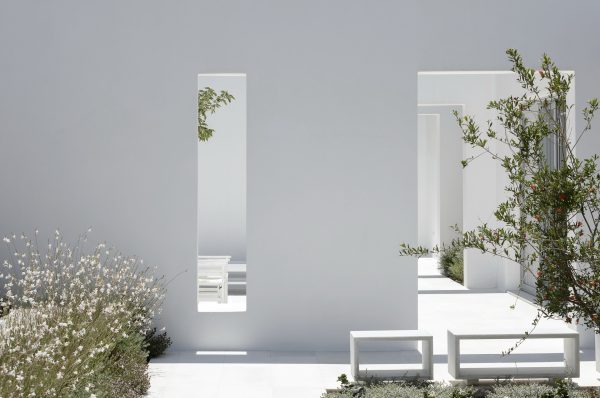 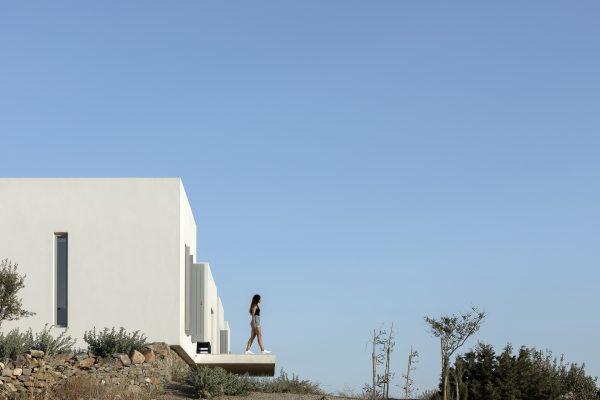 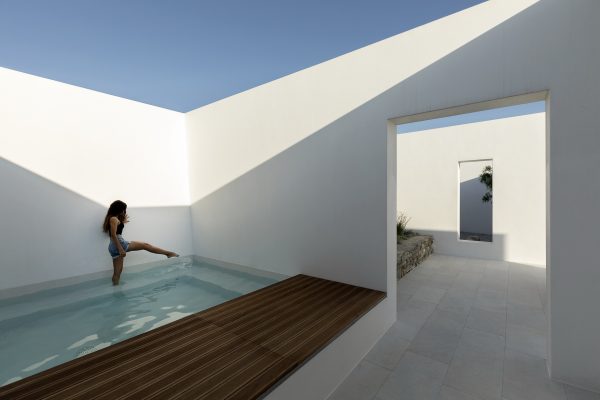 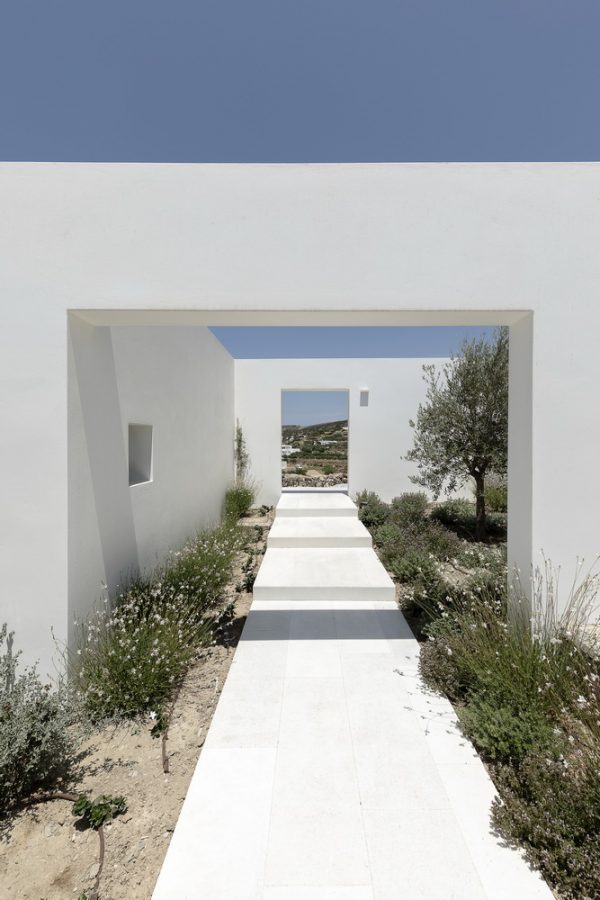 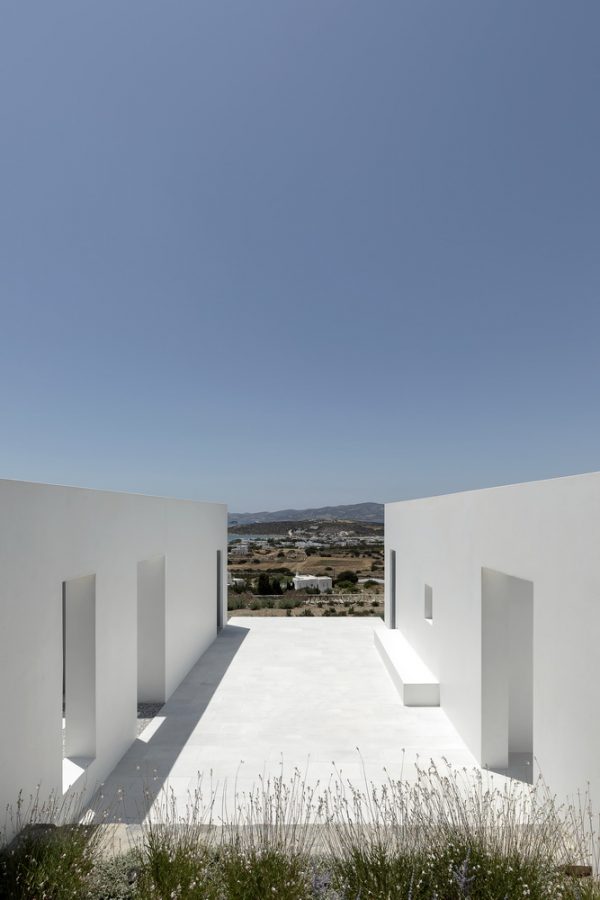 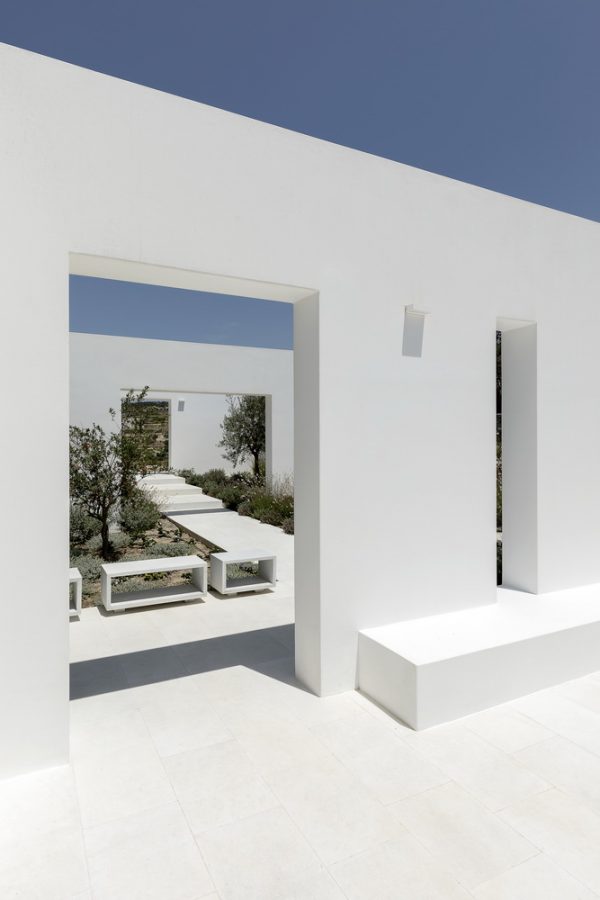 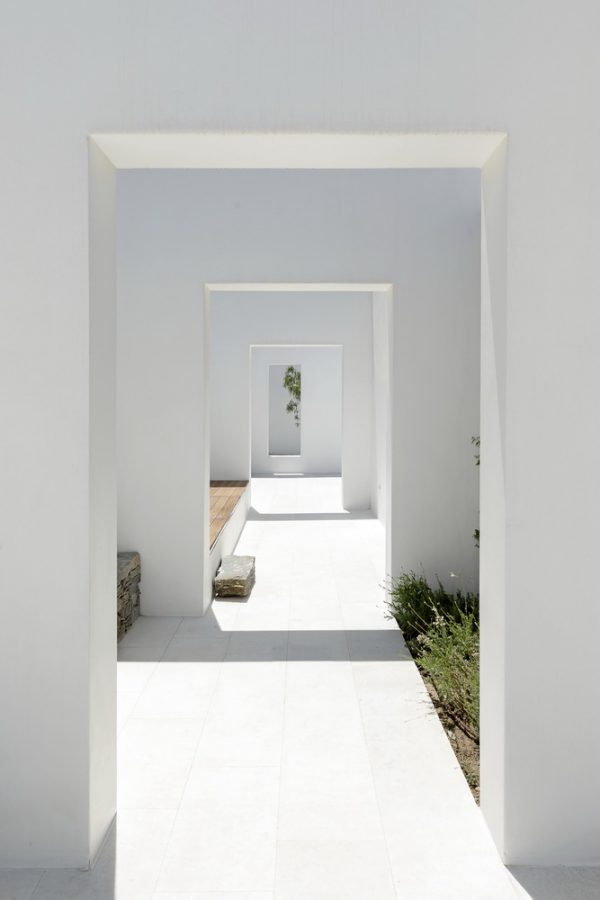 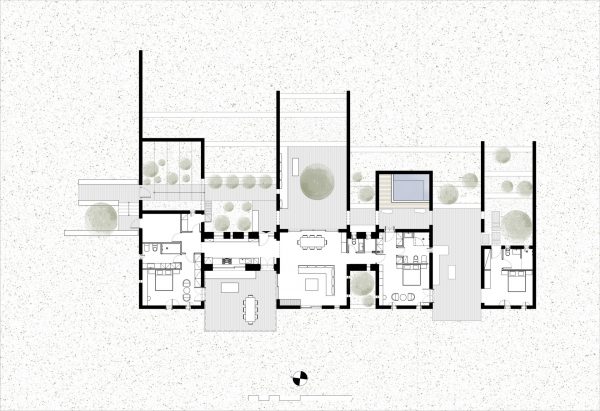 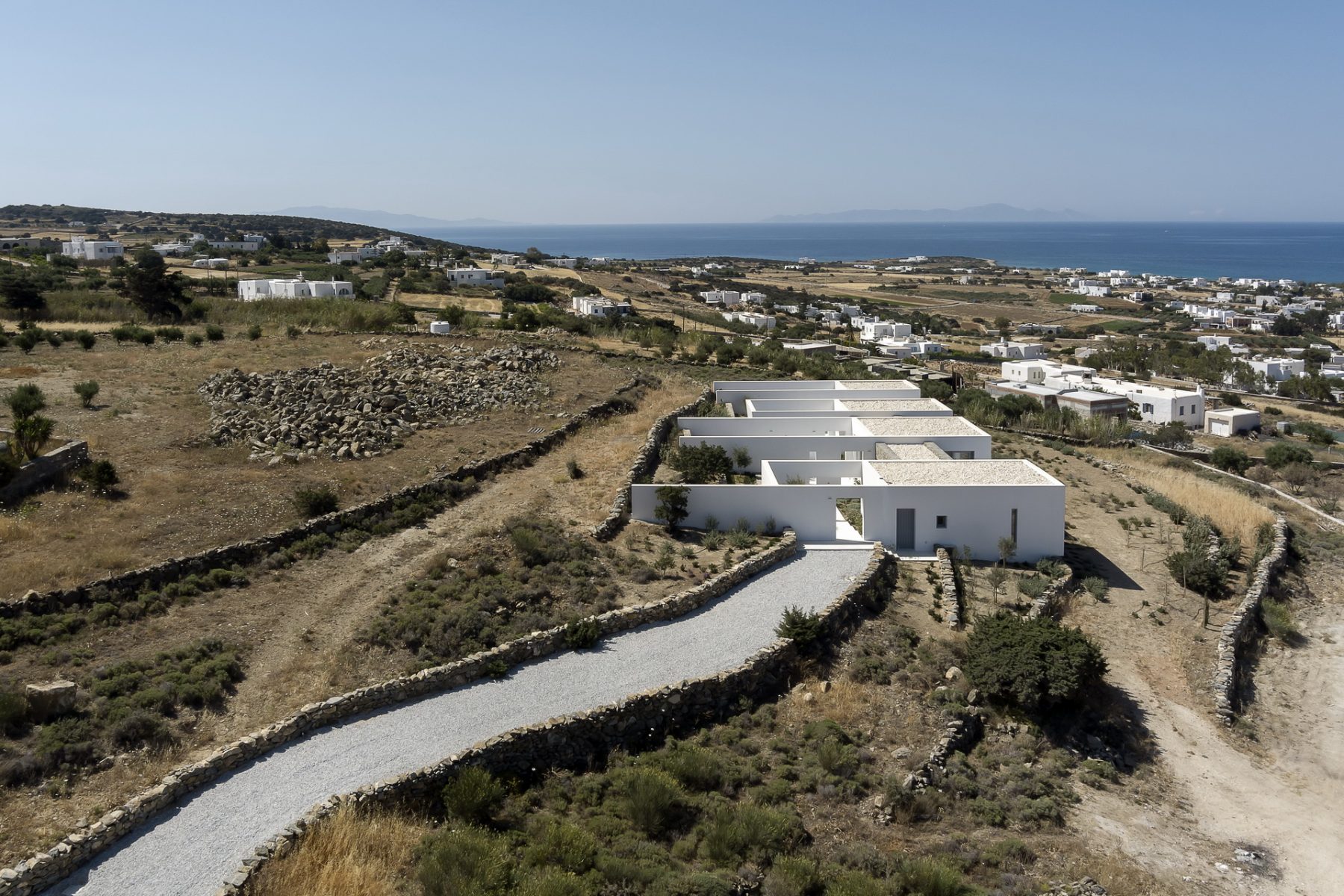 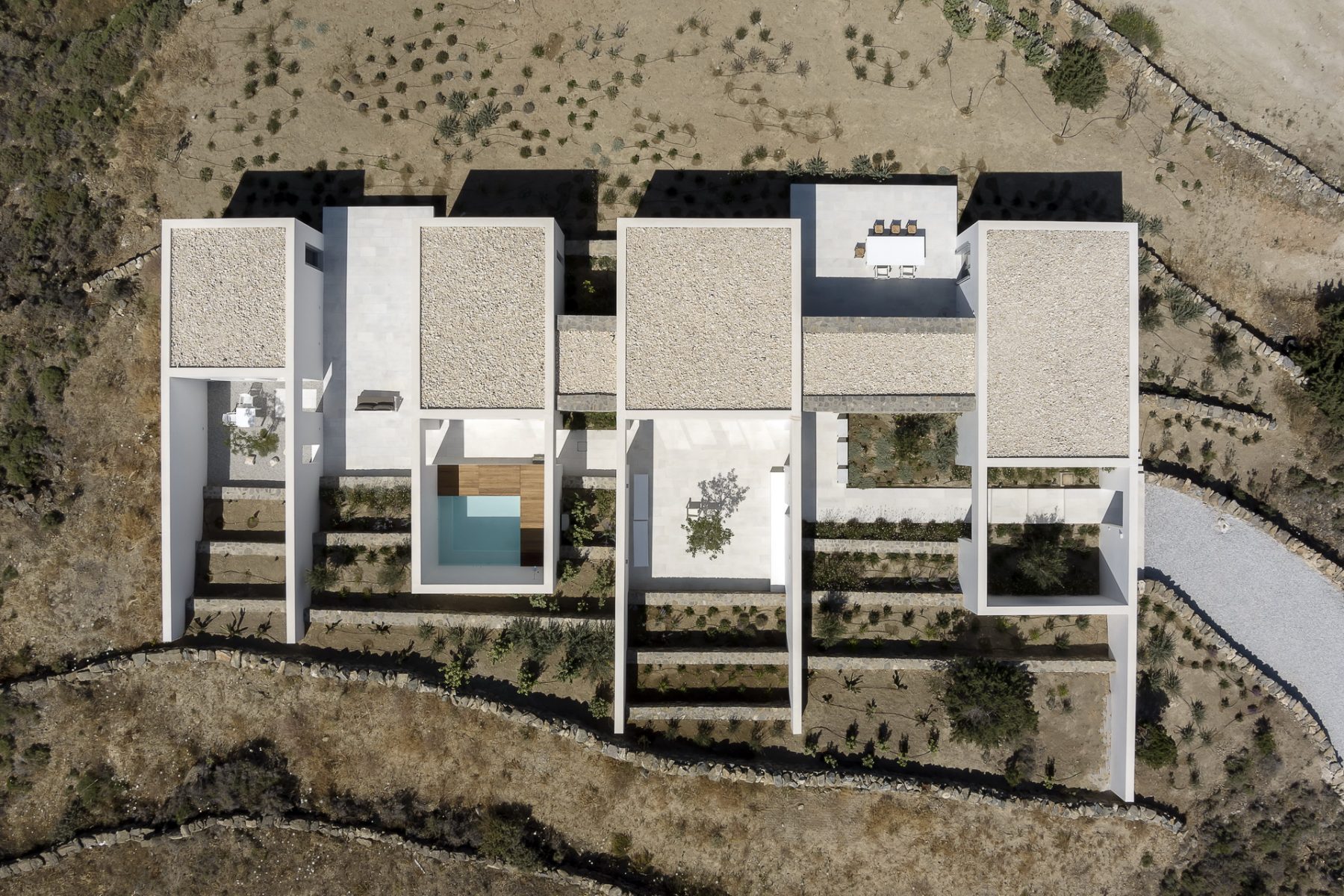 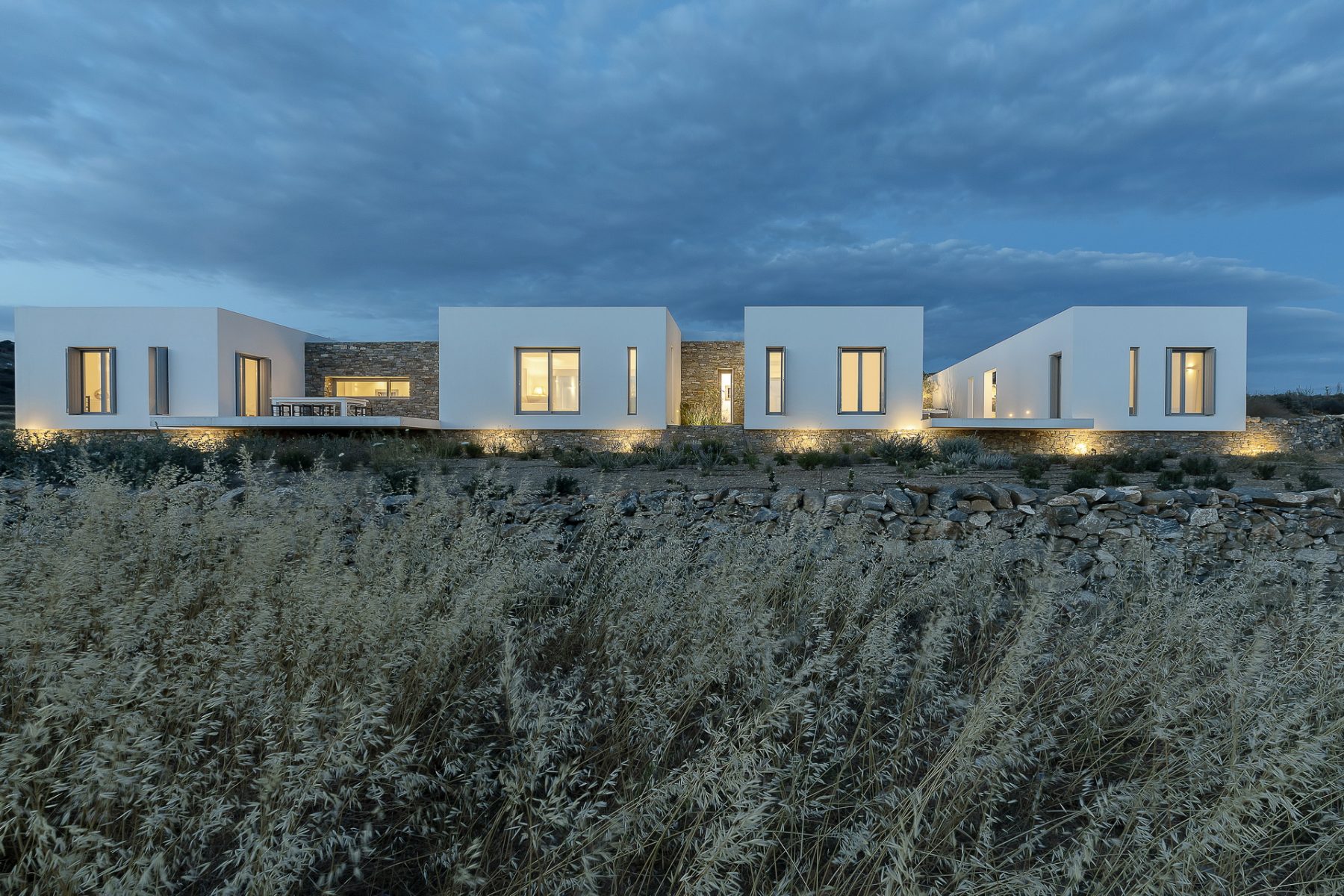 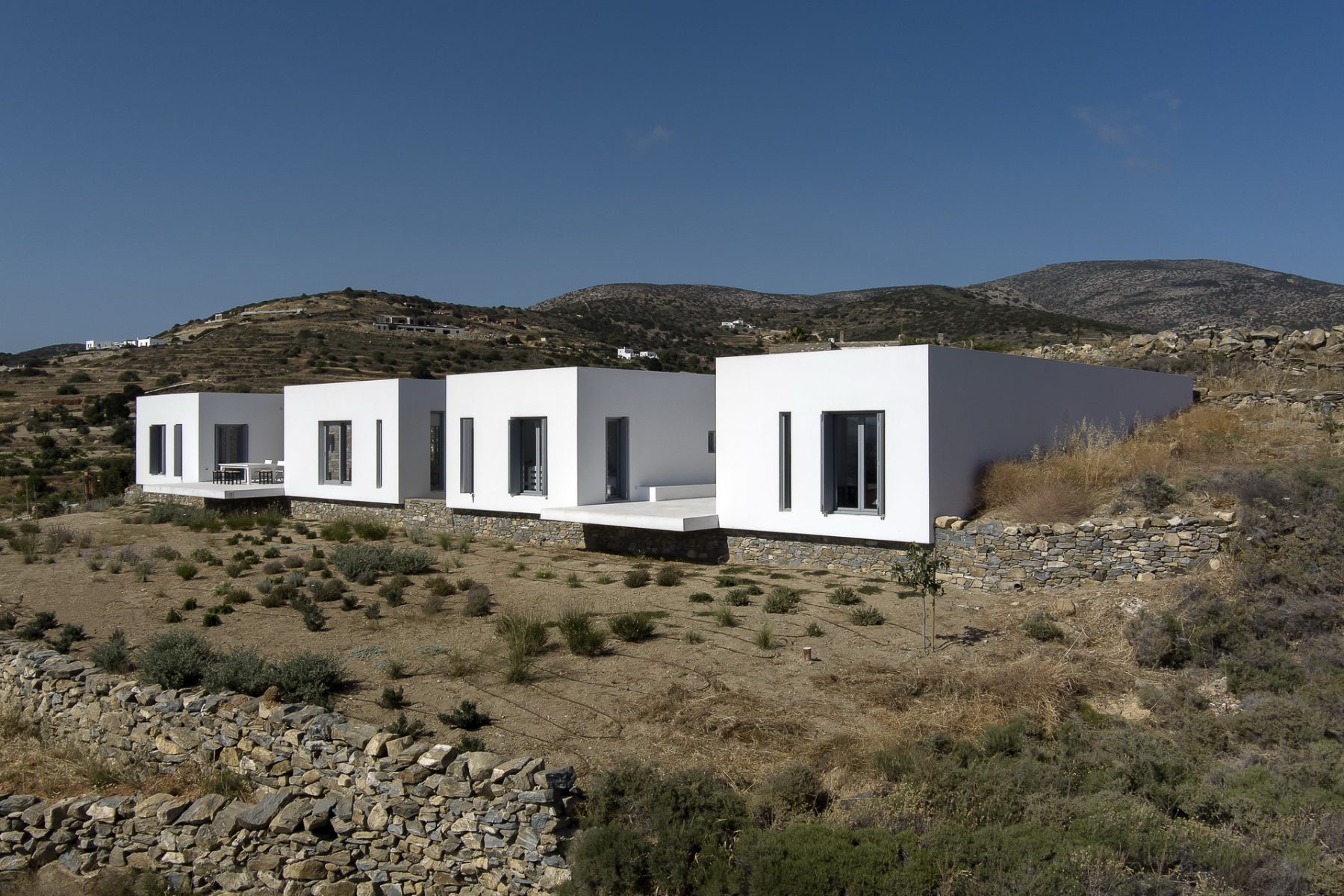 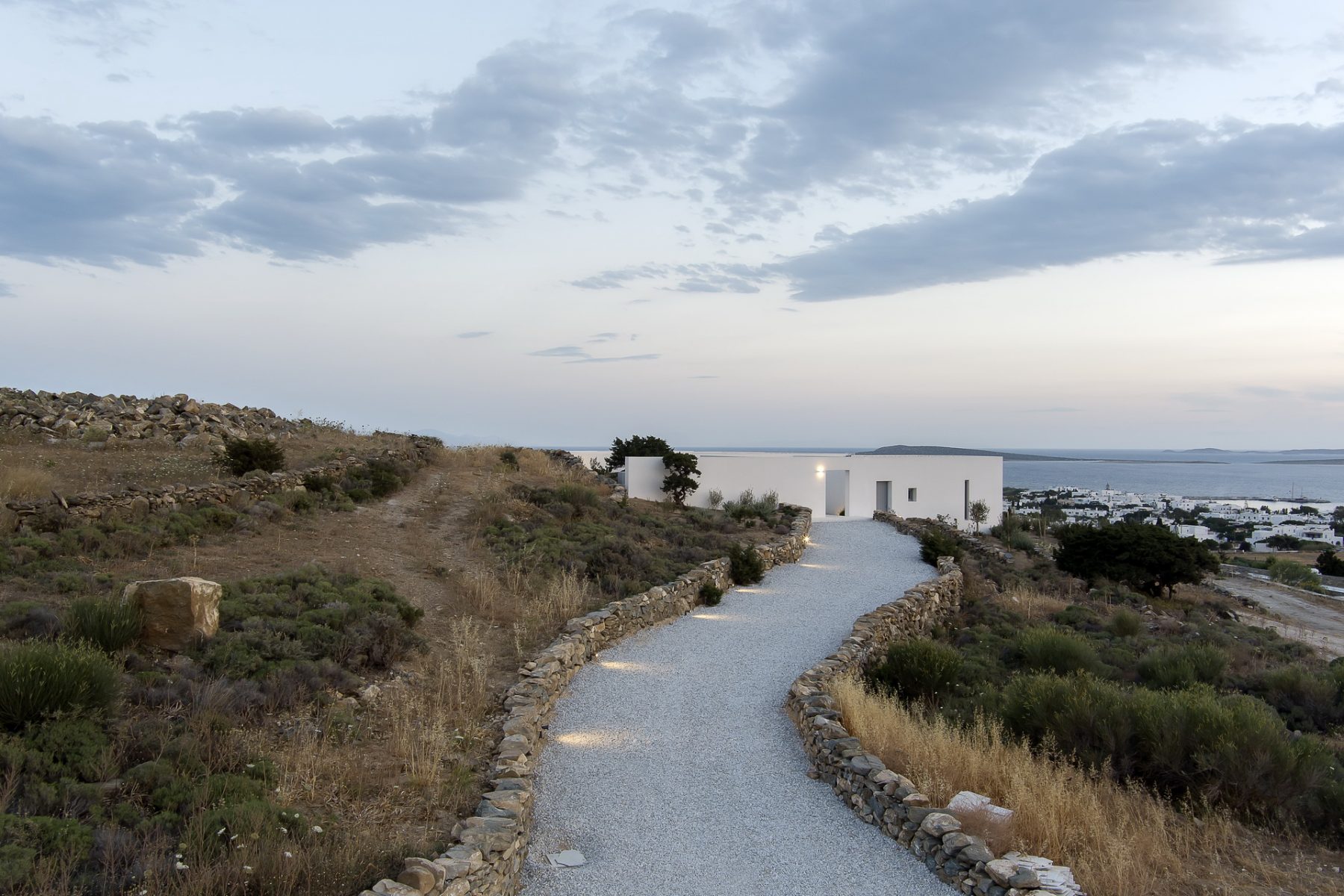 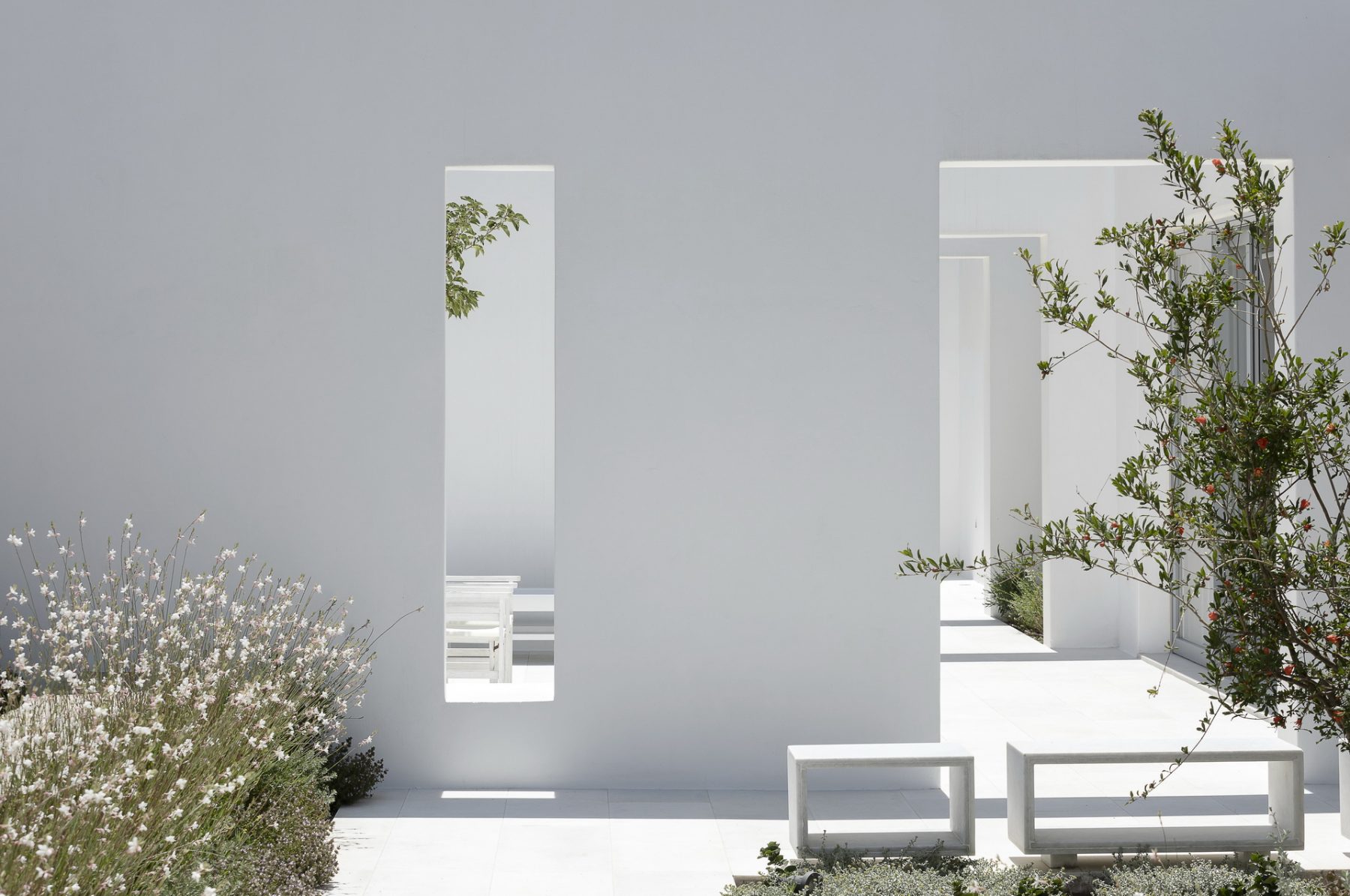 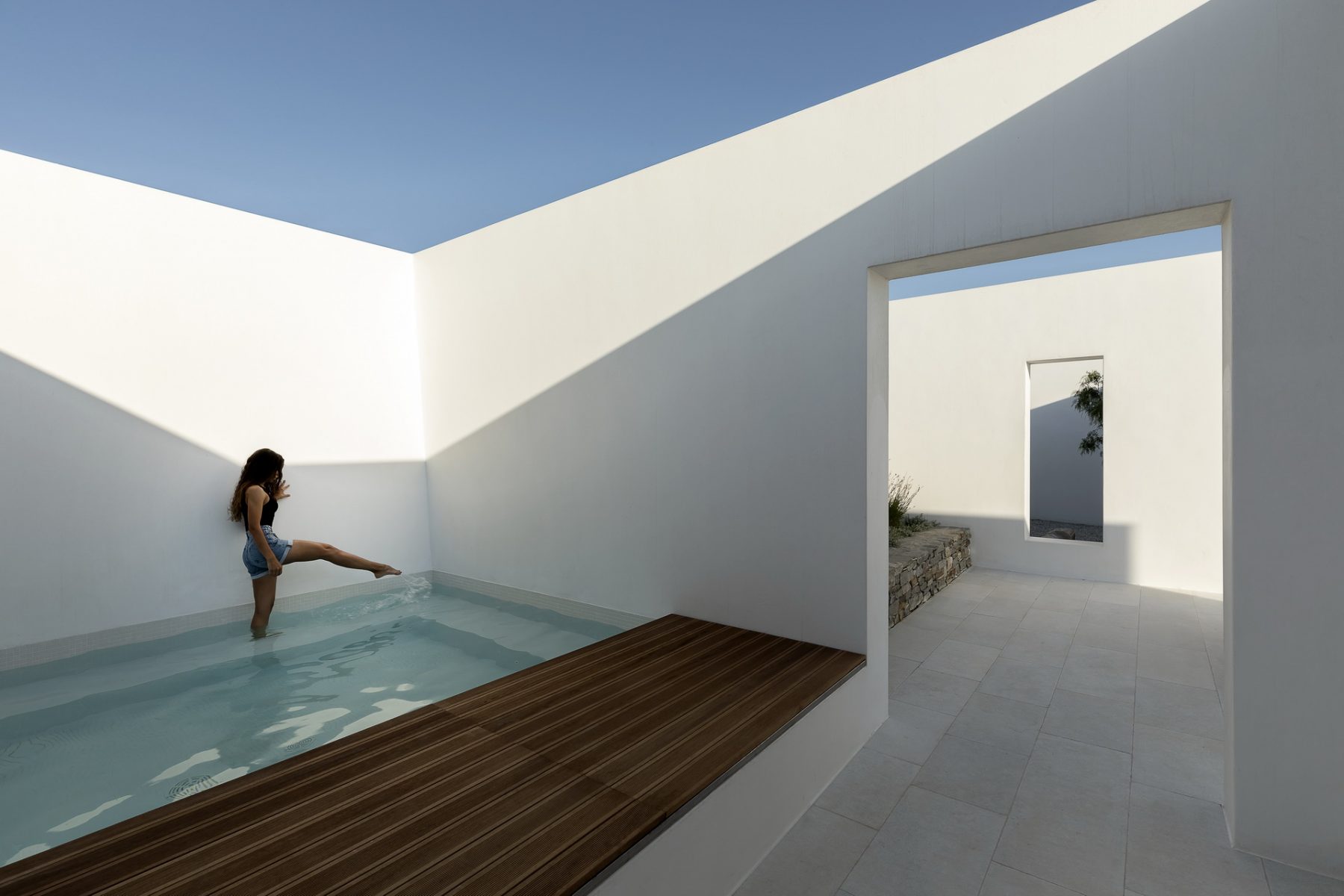 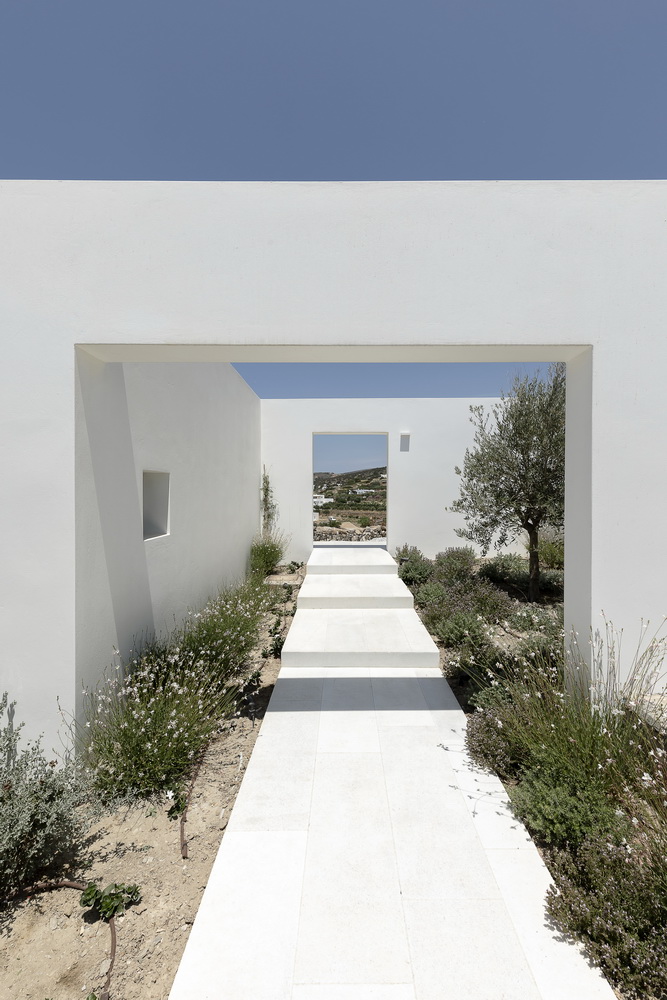 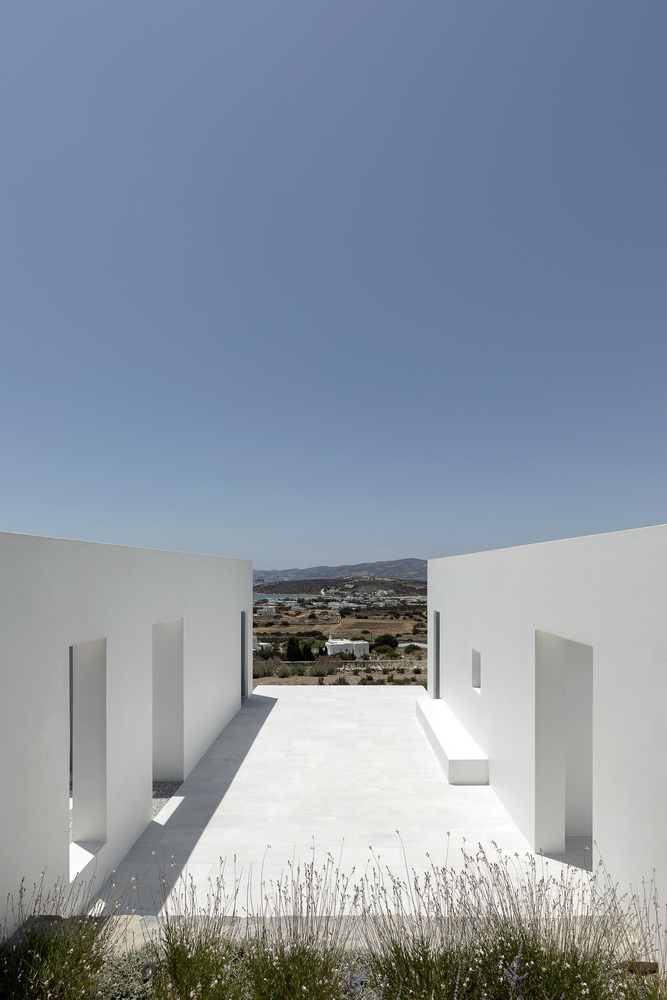 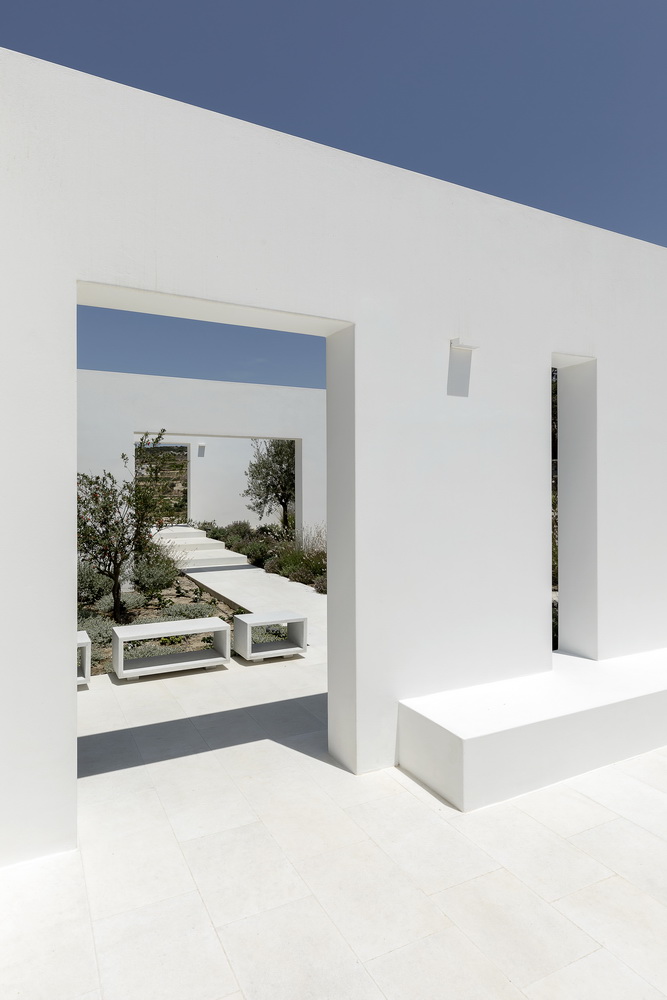 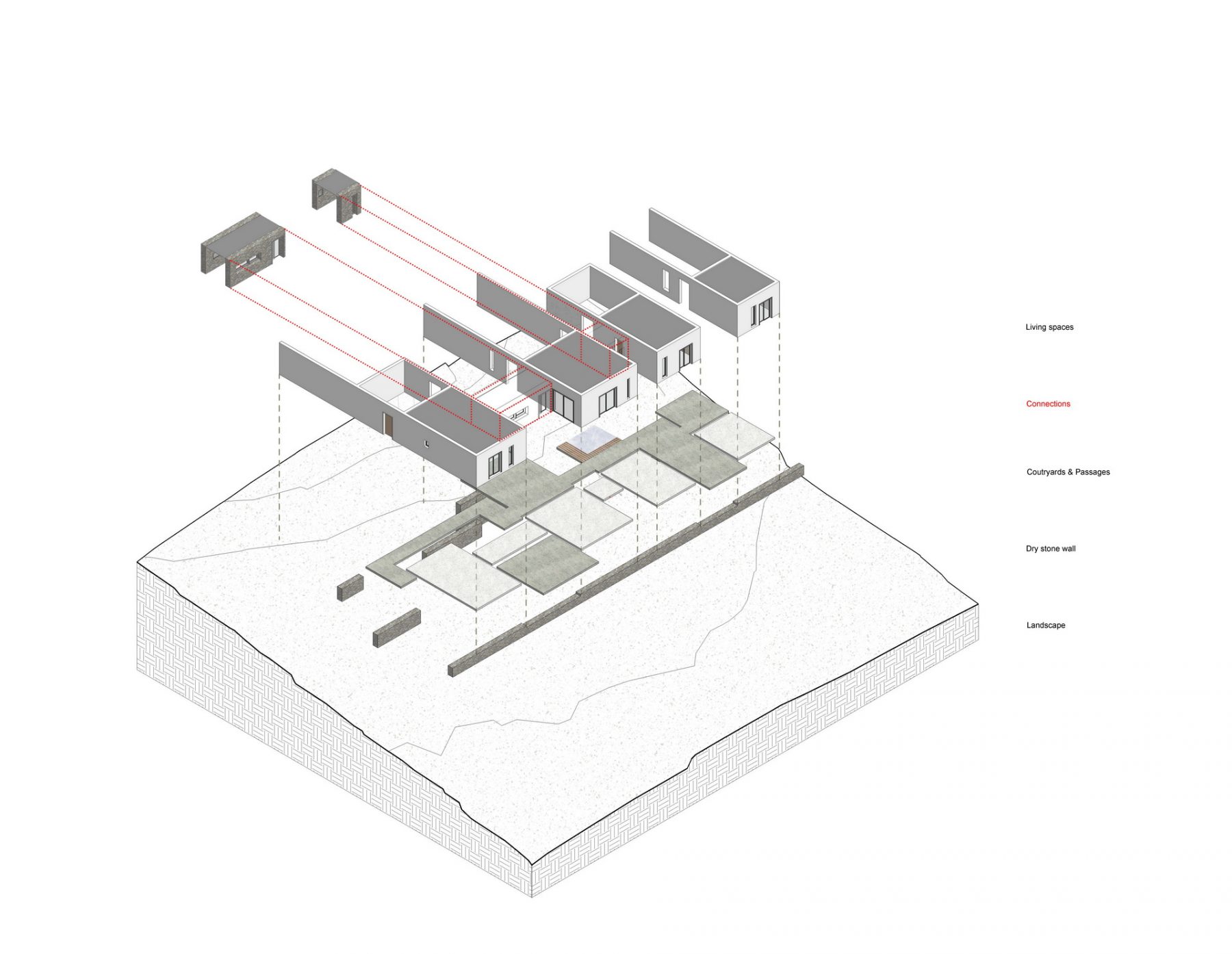 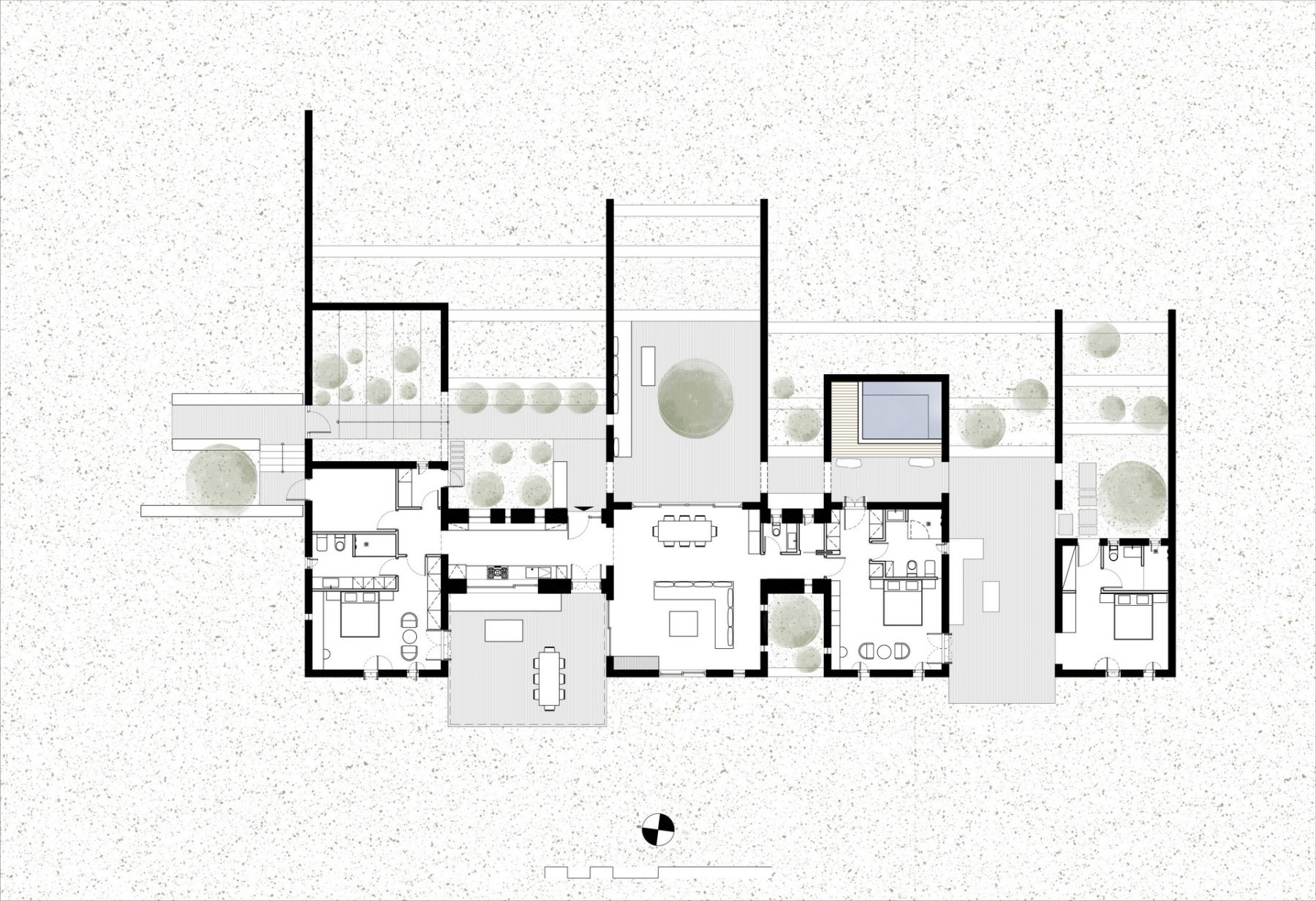 The plot is located in the southern part of Paros Island. It has a southwest orientation on the long side, overlooking the sea, the bay of Aliki and Antiparos. The building rests on the hillside and adapts to the topography and the terrain’s morphology.

Large transverse walls penetrate the slope. These walls form the back yards and give continuity to the interior of the house towards the landscape.

Spaces created between the walls, define the entrance, organize the garden, give space for a water element and a sheltered courtyard.

These spaces flow from the interior and are shaped by the walls. The walls are visible only from the east side of the plot; therefore, the living scenario is revealed upon entering the residence. A path crosses them, which connects the thematic sections. The path unfolds parallel to the path inside the house, forming views towards the sea and the living areas.

The volumes of the house develop towards the view and project against a low stone wall forming a view to the west. On the one hand they are firmly hooked to the ground and on the other they seem to float towards the view and the natural relief. The same pattern is followed by the intermediate and front yards – balconies that aim at the sea.

The entrance is on the north side of the plot and the highest point acts as a gateway to the residence. Everything is hidden behind the white wall with minimal openings, which welcomes the visitor by concealing the interior layout, as well as the front yards. The composition works with design and functional dipoles.

Hidden spaces and those exposed from the visitor’s eye

Inner closed path and the path between thresholds.

Dwelling in Nature and hovering over the slope

The large volume of a single building is broken down into smaller volumes, directly adapted to the terrain. The “Fifth view”, from above, becomes dominant leaning against the hillside.

The architecture swings over The landscape forming spatial units in the attempt to define the scenario of the holiday habitability. The intense Cycladic light elaborately stages all possible scenarios and transforms, during the day, the architectural composition. Architecture embraces human activity, creating an intimacy with space and place.